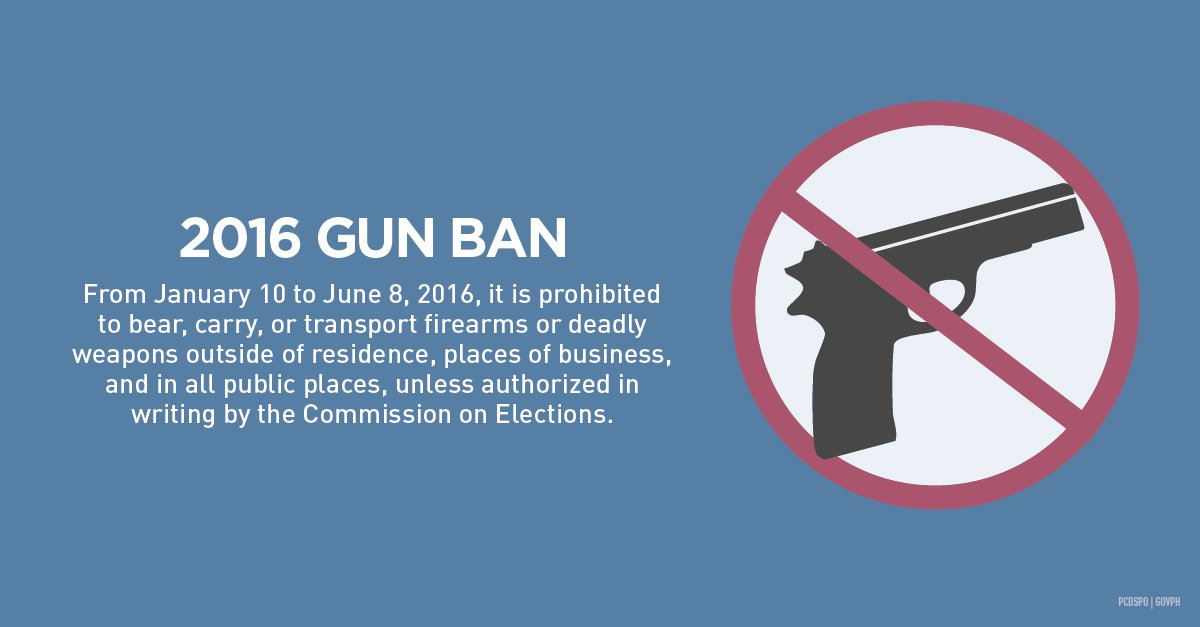 As defined under Rule I, Section I of COMELEC Resolution No. 10015 dated November 13, 2015, the Committee on the Ban on Firearms and Security Personnel (CBFSP) refers to the committee created by the Commission to implement the laws and rules on the ban on the bearing, carrying, or transporting of firearms and other deadly weapons, and the employment, availment, or engagement of security personnel or bodyguards during the election period.

During the election period (January 10 up to June 8, 2016) no person shall bear, carry or transport firearms or other deadly weapons in public places.

PERIOD OF THE BAN

Unless authorized by the CBFSP, the following are the Prohibited Acts during the election period:

To carry firearms and deadly weapons outside residence or place of business, and in all public places
To engage the services of security personnel
To transport firearms and explosives, including its spare parts and components

SUSPENDED, INEFFECTIVE, AND WITHOUT FORCE AND EFFECT

Imprisonment from 1 to 6 years
Permanent disqualification from public office and loss of right to vote
Deportation for foreigners, but only after prison term is served
Cancellation of and/or perpetual disqualification to secure license or permit

WHO MAY BEAR, CARRY, OR TRANSPORT FIREARMS OR DEADLY WEAPONS?

Listed under Rule III, Section 1 of COMELEC Resolution 10015 are the persons who may be authorized to bear, carry, or transport firearms or other deadly weapons during the election period.

The application for the certificate of authority to bear, carry or transport firearms or deadly weapons can only be accomplished online.